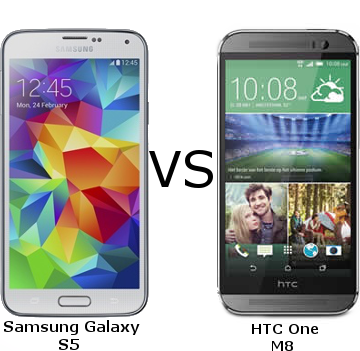 Samsung Galaxy S5 VS HTC One M8. What I Choose and Why.

Well it was that time again for an upgrade. My upgrade would be going from the HTC Evo Design 4G to either the Galaxy S5 or One M8. My first thought was the One M8 since my previous 2 phones were the HTC Hero and then the HTC Evo Design 4G all from Sprint. I enjoyed the HTC phones and didn’t have much of an issue, despite the horrible battery issues, I like the UI and simple features. Before I went and picked up the M8 I wanted to do my research on it plus I really was curious about the Galaxy S5. So I wanted to compare and then make my decision at the store.

From my research I found that both phones are pretty close in comparison to speed and performance. I did read that the One M8 had some really great speaker sound AND it was mounted on the front. Now that’s just awesome right? I mean your playing games and watching videos and you would expect the sound to come at you right? Excellent decision in mounting them speakers in the front. So everyone says. Well I think it was cool to have but to be honest, I dont give a shit. I usually have my headphones on anyways. Plus why do I want loud speakers on my phone? There is no reason for this. If I wanted to play my music loud I will play it on my entertainment system, not on my phone. It would also get very annoying hearing that in public.

The camera seemed to be better with the Galaxy S5, but I am not a selfie addict. I don’t care about taking the best damn pictures just as long as what I do take comes out to my standards. So this didn’t really have any push for me in the Galaxy S5.

But wait, the Galaxy S5 has an awesome heart rate monitor and exercise routine tracker. Meeeh, I don’t care about that. I much prefer an accurate heart rate watch instead of pulling out my phone, opening the app and waiting for it to read my pulse.

The One M8 and Galaxy S5 cost about the same(with contract) but you would get double the space on the One M8. Thats 32GB storage vs the 16gb storage from the Galaxy. I didn’t understand this part at all.

Now here is what did it for me. I was going to get the One M8 simply cause I always enjoyed the HTC phones and I read that the battery issue is much better. So much better its non-removable!! Screw that. Every HTC phone I had(2 of them) I always had to get a new battery. Now if it goes out or doesn’t hold a charge I would either: attempt to change it risking breaking those small ribbon cables or pay out the ass for someone to dissemble and change the battery. Why would they do that? To make up for the front speakers? I am sure it all comes down to money, but they lost out on a customer because of that. Horrible decision HTC. Imagine trying to sell your phone when its time to upgrade but you have to tell the customer,”Oh you will need to purchase a new battery as well”. Yea, that’ll be easy to re-sell.

Well I got the Galaxy S5 and I am happy. I love my phone and the battery is just overwhelming! I never had a phone that could last the entire day even texting and playing games on 1 charge. Holy Crap is this how all Galaxy phones are? There are a few issues however, and the major one is bloatware. There is a ton of it. I had to disable a bunch of apps that are pointless to me. Disabling and uninstalling a bunch of these useless apps definitely helped the battery charge even more. I may make a future post on all the apps I disabled that didnt give me any issues running the phone. Sometimes you can disable something and cause problems, but so far so good!